I’m using a quantum machine learning program that uses this game:
https://gym.openai.com/envs/CartPole-v1/
to try to keep the brown stick up as long as possible. But the Pennylane qml algorithm doesn’t learn: 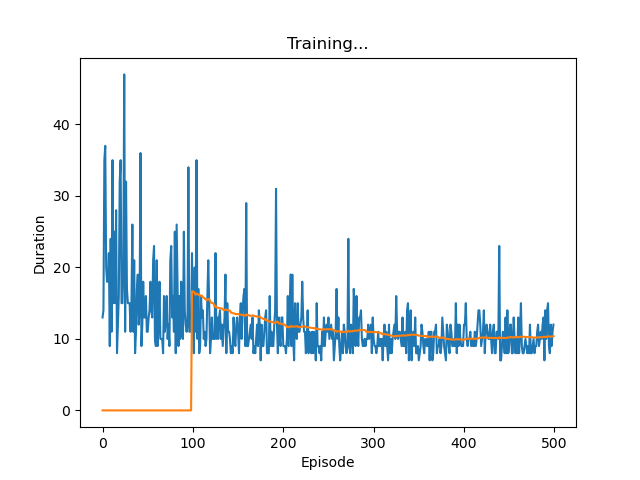 The blue is the actual duration of each attempt/episode and the orange line is the average of the last 100 episodes. At the beginning, the high duration could be due to random choices and doesn’t necessarily mean the algorithm is getting worse. To get a perspective how it should look, here is a result of the program with only classical machine learning: 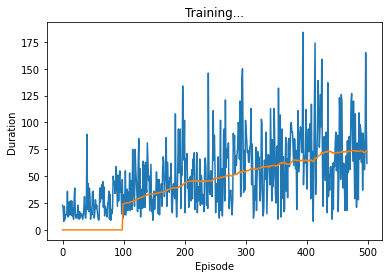 The Ansatz that was used is below:

Does anyone have an idea why the algorithm is not learning?

One thing that always comes to mind when people are working with CV layers is that if the cutoff is too small, it can be very easy to obtain inaccurate or confusing answers. The reason for this would be that certain gates (squeezing, displacement, and cubic phase) add energy to the system. The more of these gates you have, the more likely they are to raise the energy of the CV state, requiring a higher cutoff to accurately capture.

The cutoff in your code (of 3) is very likely to be too small, and to be subject the problem I described above. I would recommend verifying whether or not the system has a trace equal to (or near to) 1 at the end of your quantum layer. If not, you’ll need to bump up the cutoff dimension (with the tradeoffs in increased resources that come from that)

Hi @nathan many thanks for the insight. Are you referring to self.qlayer() or at the end of the forward() function?

Yes. More specifically, in the device used to compute that layer, as specified here:

I ran this code:

Hi @nathan yea that is obvious. Was just wondering how to get the output of the trace i.e. the matrix so I could see if it is near 1 to find a good number.

The trace of the system, \text{Tr}(\rho), can also be written as \text{Tr}(\rho I)=\langle I\rangle, so we can equivalently think of it as the expectation of the identity operator.

This allows you to construct a QNode that returns the trace like so:

Alternatively, without modifying your existing QNode, you can inspect the device after QNode evaluation to find the trace:

Hi @josh thanks for the insight. @nathan I have cutoff_dim set to 10 and played with other variables (also removed some linear layers) and still see no learning from the algorithm. Here is the DQN algorithm (similar to the one in my initial post but some things changed):

Any other ideas on how I can improve this?

Hi Shawn,
Were you able to verify that the trace remained close to one (using the methods @josh mentioned) in your updated model?

No I kept getting errors so I just opted to try different cut_off dimensions. I tried up to 30 and didn’t see a difference. The problem is with @josh’s code is that I don’t have a decorator on my layer function. The first error I get is:

@Josh do you have any recommendations on to solve this?

Hey @Shawn, if I may come in here briefly to clarify your last questions:

would be the same as writing

since the decorator turns the quantum function directly into a qnode. In other words, both code pieces produce the same object layer_qnode.

So in your case, you need to define specific values for input, w0, w1,.... at which you want to check the trace, and feed them to the qnode:

The double star notation is just a handy way to unpack dictionaries, while a single star would unpack a list.

Hi @Maria_Schuld thanks for clearing up the confusion there. I have a couple follow-up questions if that is okay:

I’m hoping to see real values for the “inputs” and “w_i’s” from the layer()function so I can then run the function with those values and see what the value of the trace is. Seems more complicated than I thought!

And yes, CV quantum computing is a bit more advanced than qubit-based

Hi @Maria_Schuld thanks for the info!

The layer function that you’ve defined will take in the parameters inputs and w0, w1, etc. and so will the layer_qnode = qml.QNode(layer, dev). What you decide to input into the QNode is up to you and your code, with some restrictions (see SqueezingEmbedding and CVNeuralNetLayers for specifics).

To get the trace of a state it’s probably easiest to evaluate the QNode, i.e. input some parameters into the QNode as layer_qnode("params-of-your-choice"), and then checking the trace of the state with dev.state.trace() as per the suggestion above.

Regarding K=0, it’s true that for a single wire the parameters with shape (L, K) will be empty, since the beamsplitters can be seen as rotations between two wires and thus won’t be applied at all on a single wire.

I hope this addresses your questions.

Hi @theodor thanks for the reply! Yes, I understood all of that but my code doesn’t provide the values for the layer function – that is where I am confused. My code provides states, actions and q-values but the w0, w1, etc. comes from (or should I say is due to) the quantum layer. As Maria stated, the values of the parameters going into the layer() may alter the trace – so without knowing what usual values of the parameters are (are they negative? are they bounded within a set of real numbers? etc.), I am kind of swinging in the dark. Does that make sense?

But, of course I did try and I am confused on how the weights should look. Perhaps someone could give me some insight?

And am getting the error;

I’d appreciate any guidance on the shape of the parameters.

The parameters are mostly between 0 and 2\pi for the different angles for the beamsplitters and rotations in the interferometer part of the network (the details can be found in the documentation). There are no specific values that you should use here. What you could instead do is train the network, optimizing over these parameters, and print the trace in-between each step to see if the trace keeps close to 1 (if it does not, then you should use a higher cutoff).

The shape of your inputs should follow the ones in the CVNeuralNetLayers; see the list of shapes under Parameters at the bottom of the documentation page (e.g. they should be 2-dimensional arrays of floats with shape (L, K) or (L, M), with some being, as noted earlier, empty: [[],[]]).

Just as an example (this should work):

and then printing the trace after evaluating the above QNode:

Thank you @theodor and everyone!

Hi everyone, I’d like to restart this topic. So over the last week I’ve been programing and running several games with classical and quantum algorithms and would like to discuss some of my findings.

I made a new very simplified reinforcement learning deep q-network algorithm (DQN) using the game Frozenlake-v0 and have been running both classical ML and QML programs over the last 5 days. The cartpole game that I used at the beginning of this post ended up being too time costly in terms of finding an optimal policy when using QML so I switched games. Frozenlake is as simple as it gets.

The neural network for the DQN (classical ML) is as follows:

And after testing an assortment of different hyperparameters here are the best results I got with a learning rate of 0.00012: 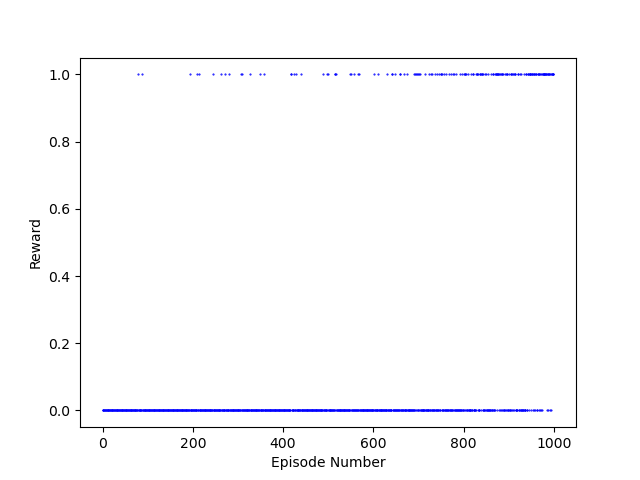 What you see here is: 0 is the total reward if the agent does not get to the goal and 1 if the agent makes it to the goal (click on the Frozenlake hyperlink above to get a visualization of the game: H = hole, F = Frozen, G = Goal and S = Start). So we see after a lot of exploration, the agent learns heavily around the 700 mark and it is almost certain that the agent reaches the goal every time after 1000 episodes.

For the QML version I used:

I used cutoff_dim = 30 as it gave roughly .99 from the trace. Two of the best results were: 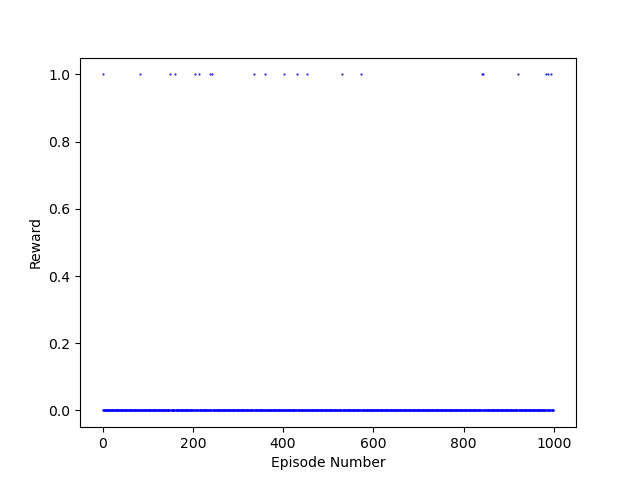 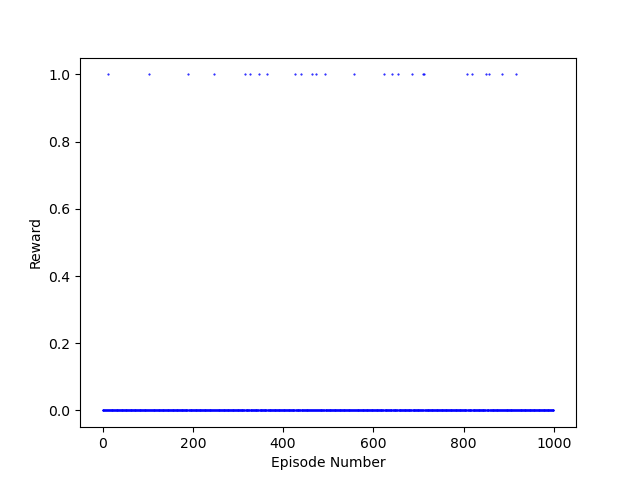 So it’s a bummer it is not learning and I would like to get some input as to why this could be or what else I can try out that could potentially improve the results.

Some more remarks and questions:

The findings in the HuHu papers:

use various algorithms from RL and he was able to get his programs to work quite quickly and successfully in terms of episodes.

I contacted him about his findings but he hasn’t been responsive unfortunately.

Any insight is greatly appreciated.